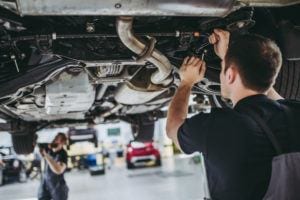 All vehicles aged three years or more require a valid MOT test certificate, certification that must be renewed annually. The MOT checks vital components that make driving your vehicle and transporting the people inside as safe as possible. The MOT test that we know and love changed on 20th May 2018, with new, stricter regulations coming into effect.

As a leading provider of MOT testing in Waterlooville, we keep abreast of all changes to the MOT test so our customers don’t have to. Here our experts share all you need to know about the 2018 MOT test changes and how these tougher rules determine your pass or fail result.

Why the big change?

The MOT test had remained relatively unchanged for a number of years. As of May 2018 however, the regulations became stricter across a number of areas to adhere to the EU Roadworthiness Package. Whilst the same components – including lighting, signalling equipment, steering, braking, tyres and wheels, and seatbelts – are checked, the standards for achieving that pass result are higher to comply with the latest European Union directive.

One area of change that affected all vehicles undergoing an MOT test is that faults are now be classed as ‘Minor’, ‘Major’ and ‘Dangerous’. Minor faults are the equivalent to the advisory notices you received as part of an MOT test before 2018. Like advisory notices, minor faults relate to items that aren’t bad enough to fail the test but instead need to be fixed at some point or another. Faults classed as ‘Major’ need to be fixed immediately before the vehicle can be retested. Dangerous faults not only require fixing and retesting, but without attention will make your vehicle illegal to drive on public roads.

Diesel vehicles have been no stranger to the headlines in recent years and the new EU directive reflected the government’s and wider European Union’s long term objective to phase out this vehicle type. The updated MOT test saw diesel vehicle owners meet new, stricter rules on emissions.

A diesel vehicle fitted with a diesel particulate filter (DPF) incurs a major fault and the test will be failed if visible smoke of any colour emits from its exhaust. Rules also relate to the fitting of the DPF. Testers are required under the post-2018 regulations to check whether the DPF has been tampered with or removed from the vehicle. If evidence is found that the DPF has been tampered with or removed, then the MOT tester can refuse to provide an MOT test. That is, if the vehicle owner has a legitimate reason for its removal, for instance, if the DPF has been detached for cleaning purposes.

The steering system is one of the areas that has always been put under scrutiny as part of an MOT test and continues to be examined thoroughly under the post-2018 MOT testing rules. Testers check more closely for fluid leaks, with heavy leaks from a vehicle’s steering system a likely cause of MOT failure. Blown bulbs, significantly worn brake discs and reversing lights that don’t work also constitute as major faults under post-2018 MOT rules.

Being aware of the most common MOT fail items (such as brake lights, fuel and fuel cap, headlights and indicators, horn, and number plates) and ensuring they are in good, safe, working order before you book your vehicle in for an MOT test is recommended.

Having a valid MOT certificate is part and parcel of being a responsible driver. Save the date for your MOT test today by contacting our Waterlooville MOT testing team.